While vacationing recently in our beautiful province it became abundantly obvious that many invasive plant species, especially the flowering Scotch Bloom, English Ivy and the wild Blackberry, appear to be taking over large areas of native habitat . Here is my personal short list of plants recommended not to grow in your garden and if you find them it is best to prevent them from flowering or try and remove them – from the root up. 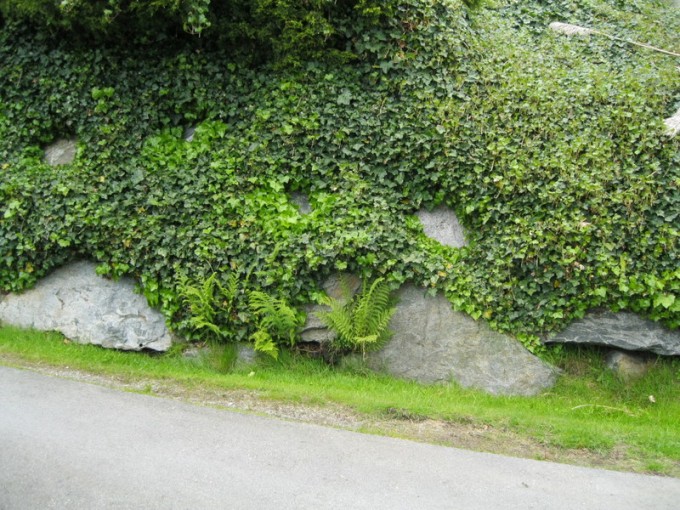 English Ivy When driving through residential areas ivy is often seen growing up tall native evergreens (which it can eventually kill), on house chimneys and brick walls or entirely covering garage roofs. This is one of the most problematic species in the Lower Mainland according to The Greater Vancouver Invasive Plant Council. It is a very pesky plant once it takes hold although many people still plant ivy in their gardens.

Scotch Broom This plant is not such a problem in your residential gardens but its very bright yellow flower is evident along many roadsides at springtime. This plant oozes toxic substances into the soil to prevent native species from growing. It has such a negative effect on the environment as it increases wild fire fuel loads as well as restricting wild life movement. Try and chop the plant back to the main stem when it is flowering to retard or prevent regrowth.

Blackberry (Rubus genus) As well as a native wild trailing blackberry there are other non native species such as the Himalayan (widespread) blackberry which were introduced from Eurasia and is invasive. As well there is a European blackberry (non native – exotic) and a species called Cut Leaf Evergreen. Usually once blackberry brambles take a hold on your property they are an absolute pest and a nuisance to get rid of. Having said the foregoing, Wild Blackberry is one of my favourite antioxidant fruits which we love to eat freshly picked, with yoghurt, make into jam, preserves or juice.  See CAP article on Wild Blackberry

Japanese Knot Weed This weed can grow through concrete and walls and can grow three metres in a year. This invasive weed increases erosion, degrades wildlife and fish habitat and re-sprouts and unfortunately has to be eradicated with herbicide.

If nothing ever changed, there’d be no butterflies.
~Author Unknown

Morning glory If you have had to deal with this weed you will know what a problem it is to keep from your garden once it has found a home there. The common white flowering variety which seems to take over even blackberry brambles should be on an invasive species list as it takes a lot of work to eradicate this plant as all the roots have to be removed.

Butterfly Bush (Perennial ornamental – native to China) The purple or white blossoms of this plant attract butterflies, insects and humming birds. It also displaces native vegetation as do other invasive species and seems to propogate readily.

Two species you may choose to grow in your home garden which I recommend be contained are all the mint family (which make refreshing teas) and the Jerusalem artichoke. Grow these in large containers or raised beds to ensure they do not spread. Melissa Officinalis (Lemon Balm) a member of the mint family makes a healthy tea (good as a relaxant, headaches, insomnia and anxiety) but if left to flower in your garden will turn up year after year throughout the garden and have to be weeded out – or potted and given away.

Once most invasive species find a foothold in your garden or property it can be impossible to eradicate them completely and often control is unfortunately the only solution.

Check out the links for suggestions of native, indigenous plants which are

Examples are ferns of which there are dozens of commercially available native species and also Ocean Spray (rose family).

Yours is the Earth and everything that’s in it.
~”If ” by Rudyard Kipling