Three bacteria that turn up frequently in food recalls, from cantaloupes to packaged salads, cold cuts and many other common foods, are Listeria, E coli and Salmonella. Buying “organic” produce is unfortunately not the answer, as organic food products have been recalled as well. These organisms in our food can be fatal to children (see Kevin’s Law – named after two-year-old Kevin Kowalcyk who died after eating a hamburger contaminated with E coli), the elderly see this article  (link expired see LINKs below) regarding a woman who died from E coli poisoning in her seniors complex) and those with weakened immune systems.

These incidences seem to becoming a more regular occurrence. What are they and how do these toxins get into our food? And how do we protect ourselves and our families? The annual statistics on deaths from food poisonings appears to be increasing and, although the information contained here is basic, I feel it is a good reminder for all.

E. coli and Salmonella outbreaks have become more frequent in America,
whether from spinach or jalapenos. In 2007, there were 73,000
people sickened from the E. coli virus.
Quote from Food Inc (the documentary)

Salmonella is a bacteria (of which there are many) that causes many illnesses to humans. It is carried by animals and is contracted by humans through ingestion. Common sources are poor hygiene, polluted water, and animal excrement. Contamination can be found in products such as poultry, cattle,  eggs, milk, cheese, and other meat. To protect against Salmonella poisoning :

is another frequently-occurring food poisoning agent. Listeria is a naturally occurring bacteria found in soil and animals, similar to Salmonella.

Besides the above mentioned recommendations (for Salmonella), it is important to wash and peel fruits and vegetables. Often Listeria is not detectable by discolour or odour, so safe hygiene food practices are a must. Canada Food Inspection Agency goes as far as stating “Adults 60 years and older, pregnant women, and people with weakened immune systems should avoid food commonly associated with Listeria, including hot dogs, deli meats and unpasteurized dairy products.”

The third common food poisoning today is from E coli which affects the kidney and there appear to be larger numbers of deaths from people who have contracted this bacteria.  Instead of more data, which is provided in the links below ad nauseam, perhaps an example of an E coli death will have a more profound affect.

As I am writing this article, today’s headlines include the death of an 80-year-old woman, who was one of three struck with E. coli poisoning in a senior housing complex in November 2011.  Her family is asking for answers and accountability from management, the housing society and /or the health authority; none of which has been forthcoming.  One statement in the news article bears repeating : “the authority determined that the three seniors were likely infected with E coli because of the facility’s food preparation, inadequate cooking or improper cleaning of food surfaces.”  Also it cites that in the past (October 2011), this facility has had three violations including “food premises not maintained in a sanitary condition.”  There were two more previous violations (April 2010 and April 2011) for unsanitary food premises, equipment not in good working order, lack of accurate thermometers in cooking equipment, pests, and not maintained in a sanitary condition.”   The facility was given a “low hazard” rating in both instances.  The final statement is :  “because of  BC’s wrongful death laws..no one can be held accountable.”

It is almost impossible to avoid food contamination 100% of the time. Even growing your own vegetables, caution has to be exercised, with washing vegetables, and maintaining regular hygiene. The idea is to reduce the possibility of food poisoning as much as possible

Here are a few simple actions you can take :

A deceptive side to food poisoning is that it may happen soon after consuming contaminated food or may take days or even weeks before symptoms arise. Symptoms associated with food poisoning can include any of the following: stomach cramps, nausea, vomiting, headaches, constipation, continual fever, vertigo and even convulsions. It goes without saying that if you suspect food poisoning, seek medical assistance immediately.

We never think something like this will happen to us, but recently a young, healthy member of our family who is extremely food aware, and a vegetarian, was poisoned by Campylobacter bacteria. This particular strain of food poisoning was eventually traced to a kitchen surface where raw chicken had been prepared. Campylobacter has painful and distressing symptoms, and the official diagnosis took several days.  Living through this experience is one of the reasons for publishing this article.

My closing question is : When did “death by food” become acceptable in our society? 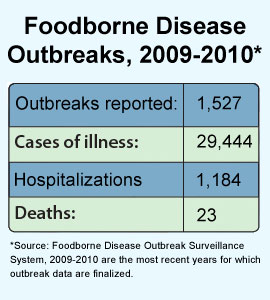 When to wash your hands ?

Consumer Report (June 2013) stating 90% of turkey burger meat contaminated with bacteria such as E coli and Salmonella.  Probable cause is turkey (chickens and pigs) are fed antibiotics when being raised.  Problem is that this is leading to ineffective treatment when antibiotics are used on humans who have food poisoning.  If you are able ~ eat only organically fed, antibiotic and hormone free raised meat.

Be concerned and ask :