While taking a quiet evening walk along the river bank, in the trees overhead there was a flurry of movement accompanied by squealing sounds as hundreds of flying foxes took to the sky – what a surprise ! These fascinating creatures have been evidently living in some of the trees on the banks of the Mitchell River in East Gippsland, Victoria, for  years – and according to a recent newspaper article have been around the Bairnsdale area since 1882.  This species was identified as Pteropos poliocephalus or the grey-headed flying fox (bat).

Having never seen these bats up close before it was interesting to watch them: during the day; and later around dusk as the light was slipping away, thousands of these flying foxes flew over the house where we were staying – very low, just above roof top level – silent and fast (35 kph) like a squadron of stealth aircraft.  Amazing to watch.

Fascinating information about the Flying Fox a large mammal

Bats are very clean mammals but some species of bats carry a virus called Lyssavirus (rabies) infection (from handling sick bats) and Hendra virus which can pass to horses through its droppings and the virus may also pass on to humans.

Climate change is influencing distribution of species in Australia including bats and some bat colonies have moved hundreds of kilometres south in recent years.

This particular bat colony was beside the river (for cooling effect) but the temperatures during our stay were in the 30’s and 40’s topping out at 42.3 degrees Celsius on one day.  I wonder if that is why we saw dead bats on the ground the day after this very hot day.

This may not be your traditional tourist venue but we were fascinated by these bats as we went for our daily walks along the Mitchell River ~ definitely unforgettable ! 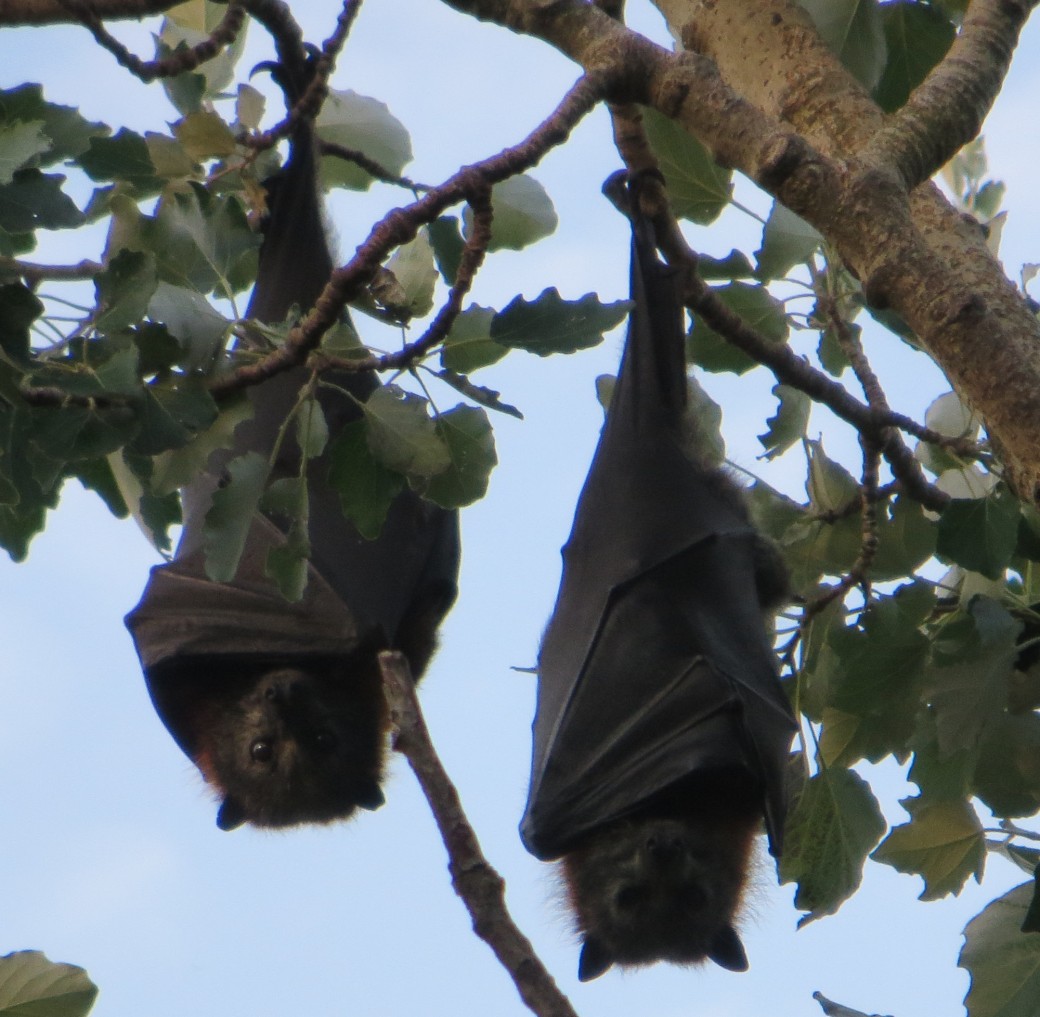 March 11, 2013 – sadly it would seem that the Bairnsdale flying foxes found dead during our recent Australia trip, most probably died from heat stress from the previous days record high temperatures in the low 40’s.  See article by J. Hayes, ABC, “Heatwaves to hit Wildlife Hard”

The Heat Wave in the Summer of 2018-19 was a disaster for the Flying Foxes.  Record heat waves with temperatures in mid 40’s to low 50’s C caused heat stress deaths in an estimated one third of all Flying Foxes with thousands dying in Adelaide, South Australia, Eastern Victoria to Queensland in northern Australia :
~ January 28, 2019:  Flying Foxes die from heat stress in Bairnsdale, East Gippsland

“… temperatures exceeding 42 ºC cause mass mortality among flying-foxes at near biblical scales, with profound effects on the behaviour and ecology of the species. These extreme heat events affect some flying-fox species more than others …” ~ Animal Ecology Lab (2006)