The Great Barrier Reef is unique to Australia and the world. The Reef is a UNESCO World Heritage listed site on the North Eastern coast of Australia; is well-known as the world’s largest coral reef and is visible from outer space. When we visited family recently in Australia we made a special trip to Cairns as we had never been there and I really wanted to see the Great Barrier Reef before perhaps it changed forever. What is happening to this remarkable undersea world which is home to so many species of fish and corals.

The Great Barrier Reef as well as a World Heritage Site is also a marine park . It is about 2300 kilometres long and stretches along the northern Queensland Coast of Australia. It is home to countless species of colourful fish, molluscs and starfish; plus turtles, dolphins, whales and sharks. It consists of thousands of reefs and small islands some of which are protected such as, Osprey, Lizard and Raine Islands. The reef has the most incredible biodiversity from the tiniest corals to massive 40 ton humpback whales which migrate to this region each year to calve. The whales number in the tens of thousands.

Changes to the Coral Reef

There are many influences affecting the coral. In some areas the reef is bleaching and some wildlife is at risk. There has been a 27–year decline of coral on the Great Barrier Reef with estimates that as much as half the reef has gone.  This has been attributed to :

1. Tropical storms and extreme weather impact the reef greatly and cause damage. “Between 1995 and 2009, approximately 34 per cent of all coral mortality recorded in the Great Barrier Reef Long Term Monitoring Program” was due to severe weather.
2. Crown-of-thorn starfish are a major problem for the reef coral; now they can be found in large numbers from Cairns north but are slowly moving south.
3. Severe bleaching of coral. These relatively new phenomena occurred in 1982, 1998, 2002 & 2006

A change in the reef is the bleaching of coral with these incidences apparently increasing over the past 20 to 40 years. Bleached coral is not dead […] “coral have been known to recover. If the algae loss is prolonged and the stress continues, coral eventually dies” . The major reasons for coral bleaching seem to be:

Another reason for the changing coral is a result of pollutants affecting water quality:

“Increased use of nutrients, pesticides and other pollutants on the land result in more of these entering waterways and the Great Barrier Reef. The resulting decline in water quality can affect corals, seagrass and other important habitats as well as the marine animals they support, while also having a detrimental affect on tourism and fishing industries.”
Great Barrier Reef Marine Park Authority


A recent concern  has been the approval of the Carmichael coal mine in Queensland which will be mining and shipping large amounts of coal to India initially through the pristine Great Barrier Reef. 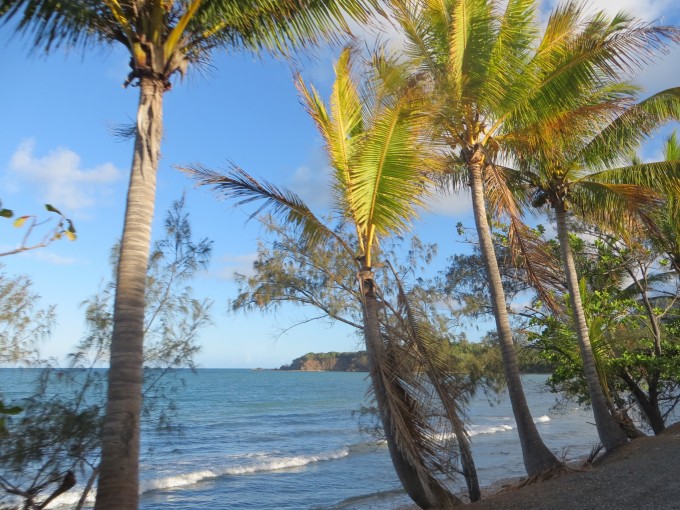 What is being done

What is Marine Debris?
“Marine debris is rubbish or litter that finds its way into the marine environment. Plastic is the most common type of marine debris found on beaches in the Great Barrier Reef. This is consistent with worldwide studies which have found plastics make up 50 to 90 percent of the number of all debris items recorded.”  ~ GBR Marine Park Authority

There is a large variety of fish, turtles and corals to view through a glass bottom boat, snorkeling or by diving. As the rich coloured corals are near the surface of the ocean, snorkeling is a great way to view the reefs. The waters are crystal clear and inviting.

Outstanding ocean views are around every corner, Pt Douglas

Tourism is a major industry in the Great Barrier Reef

Snorkelling – another incredible way to experience the marine life